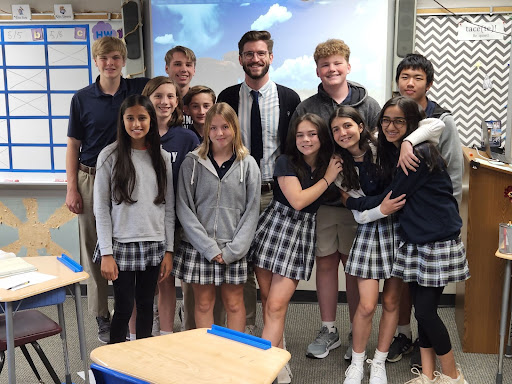 Nothing stays the same forever. This is the one universal truth of the world. TV shows get canceled, accidents happen, and people move away. Last year, the Class of 2026 and the entire school had to say goodbye to our beloved 8th-grade Latin teacher, Mr. Jake Bryan, as he moved states. He has always carried a positive energy with him both inside and outside of the classroom. He never ceases his energetic personality or his unique teaching methods, even if the whole class was too tired to share his enthusiasm. Mr. Bryan always said that one of his favorite things at Casady was when his past students would come and visit him during breaks. It might be a bit harder to visit him now, considering he lives in Colorado, but he is still open to talking whenever someone needs a bit of energy in their life. In our interview, he shared some experiences he has had at his new school and with the people in it.

CB: Not to dox you or anything, but where did you move to? What is the name of your new school?

Mr. Bryan: I moved to Colorado. We are living in a city called Loveland, but I teach at a school in Fort Collins, Colorado, which is about an hour out from Denver. The name of the actual school is Liberty Common High School.

CB: Have you continued some of your more interesting teaching techniques? (I.E. yelling like Dora the Explorer, standing on desks, the dice game, etc.)

Mr. Bryan: Yeah, some of it. What I teach is a little different, as far as level-wise. Instead of teaching 8th grade only, I’m teaching Latin 1 and Latin 2, which are essentially students from 7th grade to 10th grade. In my 7th grade class, I have them stand on their desks and chant really loud, but the high school students are past most of the verb endings, so there’s a lot less chanting. I still try to have them be as over-enthusiastic as possible, so there’s some channeling of our inner Dora energy going on there.

I don’t know what happens between high school and middle school, but some of the high school students think they’re a little too cool for school; too cool to be standing on their desks and yelling real loud. But one class of 8th and 9th graders heard that we used to stand on our desks and chant at Casady, and they wanted to chant for a class and it was a lot of fun. So maybe I should give the high schoolers a little more credit.

We haven’t played the dice game yet, mainly because my classes now are bigger so it’s harder to do that with everyone in the room. Most of my classes have about 25 kids which makes it a bit chaotic to play a game. I’m definitely trying to keep the obnoxious chanting alive for sure.

CB: Last year you had the goal of wanting one of the other teachers to shut your door because you were too loud. Have you managed to achieve that goal this year?

Mr. Bryan: Not really. The only classes around me are other Latin classes and they understand the yelling. Something that is fun though is that I have one of my Latin 1 classes with 7th graders at the same time as another Latin 4 class, so whenever we start chanting really loud, they’ll try to chant something louder so we get in a chant battle.

CB: How are you liking your new students and do you have any stories of them you would share?

Mr. Bryan: I don’t know about student-specific stories, but one cool thing is how you know the houses at Casady like Martin and Kelly? Well, the middle schoolers here have what they call orders and the high schoolers have the same concept but bigger, called houses. Any dance or event is sponsored or put on by one of those houses or orders, so the people in them are more involved in the things the school is doing, more than just the games Casady does. There are six orders in the middle school so there are six events each year and they earn points based on how the event goes and attendance. It was cool to see how a similar idea was done differently and I like how they were able to carry it up into the high school. It’s a thing they seem to take pride in.

I really enjoy my students here, but it’s a different environment here than in Casady. I think because they have a different approach to teaching, it’s a little more classic approach to learning.

CB: How are you liking the other teachers and do you have any stories of them you would share?

Mr. Bryan: I like them a lot. It’s a really good group of teachers with a lot of knowledge and experience between them. All of the Latin teachers are really great. One of them actually just had a baby, so we’re going to have a long-term sub for the rest of the semester, and then last year in the spring, the same thing happened, and they had a long-term sub for that semester.

There are three Latin 1 teachers and we all have to try and stay on pace, like teaching the same stuff on the same days and figuring out when we would all give tests. So that’s been an extra challenge. It has just been kind of chaos with all the people coming in and out and all of the coordination between teachers, but everyone’s been really cooperative and supportive. I definitely lucked out, not only finding a job in Colorado teaching Latin, but also teaching at a school where I get to work with really awesome teachers. Casady is a tough act to follow, man. It was a really great place and an awesome first teaching job to have. The only downside is that it sets some really high expectations for what a job can be, but I feel fortunate to have found a job here.

I definitely miss the faculty, as well. Mrs. Titus is wonderful. She’s just an awesome, awesome teacher.  And really all the teachers at Casady were amazing.

CB: Are there any specific memories of your time last year that you would like to share?

Mr. Bryan: It’s hard to pick specific instances, but our advisory last year was really fun. I enjoyed all of the house competitions. I think a lot more people took part and had a lot more enthusiasm, especially the 5th and 6th graders. Ping-pong was also great. They don’t have it here, so I really miss that.

I really liked the field trips. I got to go on the Dallas trip and that was a lot of fun. Watching people joust and sword fight in Medieval Times was great. I think last year was my third time going. It’s always just a good time there.

People’s character voices were really fun. The best times in class were always when the students bought in and were willing to be a bit silly. Even if it felt a little nerdy at the time, it’s good to be nerdy sometimes because you have enough serious stuff going on.

A Mr. Bryan quote that sums up time at Casady.

Mr. Bryan: I feel like it’s just a thing where everything is a blur and it all just melts together, and you’re left with just a positive feeling about a place and a time. 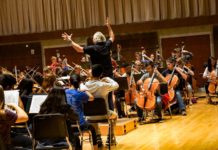 Casady Philharmonic Receives Perfect Rating from All Judges at the OSSAA...