The Casady Cyclones played a great football game against SPC-favorite All Saints. They fought hard in the trenches, made some critical plays to keep drives going, and were able to jump out to 17-13 lead to end the first half. Unfortunately, All Saints is still a talented football team and took back the lead and kept it in the second half while scoring three touchdowns. I won’t sugarcoat this: many expected Casady to be blown out of the water by All Saints, who is considered as one of the best football teams in the Southwest Preparatory Conference. However, this team proved in the first quarter alone that this game was winnable by both sides. With that being said, let’s get into the recap.

All Saints struck first with a TD but failed to convert for two points.

Casady then responded by driving down the field and kicking a field goal in the red zone. The attempt by K Rob Nayfa was GOOD for 3.

That wraps up the scoring for the first quarter. With the exception of the first touchdown, Casady’s defense stood strong. The ‘clones also did a great job of limiting All Saints chances by controlling the clock with the run game. Even though the long drive to set up the field goal didn’t end in 6, the Cyclones used the run game to control the clock and limit All Saints chances to drive down the field and score.

RB William Walter ran in a goal-line touchdown for the Cyclones set up by the pick from CB Maxwell Wariboko. PAT by Rob Nayfa is GOOD.

QB A.J. Cruse threw a touchdown pass to WR Brett Reynolds for the Cyclones second touchdown of the night. This was the result of a 63 yard drive which was set up by a kick return by Maxwell Wariboko, a deep ball by QB A.J. Cruse to WR Rob Nayfa with a little less than 30 seconds left in the half, and a trick play involving a hook and ladder by Maxwell Wariboko to Jay Bozalis which propelled the Cyclones into the red zone and set up the touchdown pass. PAT by Rob Nayfa is also good.

Halftime: The Cyclones defense looks like it has held up All Saints in the first half. I will emphasize this again and probably another time in this recap: the key to that first half was clock management. Coach Scoville should give himself a pat on the back for the way he managed that first half. While the outcome was a little different in the second half, there were some hiccups that gave All Saints the opportunities to get going.

This is where the turning point of the game occurred. The Cyclones had the ball in All Saints territory and William Walter broke out for a run, the type of run which usually doesn’t end with him being tackled. However, Walter fumbled the ball on the run and All Saints recovered it. To put this in perspective, if William Walter took that ball to the house, it would probably be a 10 or 11 point lead for the Cyclones depending on the extra point. However, that didn’t happen…

This is one I know A.J. Cruse wish he had back..

Pick Six by All Saints. PAT is good.

Reid Fisher was productive late in the game. He broke off for a long run up the middle which he got tackled on and ran in a 2-yard touchdown to trim the lead.

In the end, it was the turnovers that killed the Cyclones. Against a team like All Saints, turning the ball over will not win the game, and this showed us how. This was the last regular season home game for the Cyclones. Thank you everyone for supporting the Casady Cyclones Football Team at home.

Make sure to make the trek down to Dallas this Friday for Casady vs. Oakridge. 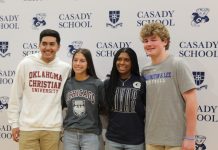 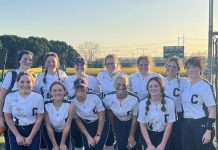 A Multitude of Fall Sport Choices: How Will Softball’s Shift to the Fall Effect Girls’ Field Hockey 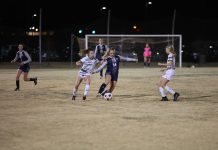 Casady Soccer Brought Out of the Cold